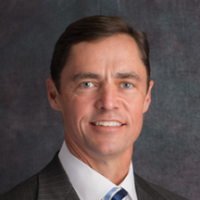 Call to make an appointment with
Joseph A. Shrout, M.D. today

Dr. Shrout is a graduate of Oregon State University where he was awarded High Honors with a Bachelor of Science degree. He earned his Doctor of Medicine at the Uniformed Services University of the Health Sciences in Bethesda, MD, and then received his post-graduate orthopaedic surgery training at Madigan Army Medical Center in Tacoma, WA.

He worked for six years in general orthpaedics and sports medicine, including a one year combat deployment to Iraq in 2003 as a Forward Surgical Team commander with the decorated 101st Airborne Division. Upon his return, he completed a one-year Hand and Upper Extremity fellowship at Walter Reed Army Medical Center in Washington, D.C. in conjunction with the Curtis National Hand Center in Baltimore, MD.

Dr. Shrout has been practicing in orthopaedic surgery since 1994, and retired from the U.S. Army in 2011 at the rank of Colonel. He has been in private practice in the Washington area since 2011, and has maintained his involvement in orthopaedic sports medicine by participating as a team physician for the D.C. United Men’s professional soccer team, and Head Team Physician for the D.C. United Women’s team in 2012. In 2013 he served as Head Team Physician for the inaugural season of the National Women’s Soccer League professional team, the Washington Spirit. He also has a particular interest in the treatment and prevention of sports related injuries of the upper extremity.

Dr. Shrout and his wife, Anne, have three daughters who are active in school and sports. The family enjoys golf, fitness, and water skiing.